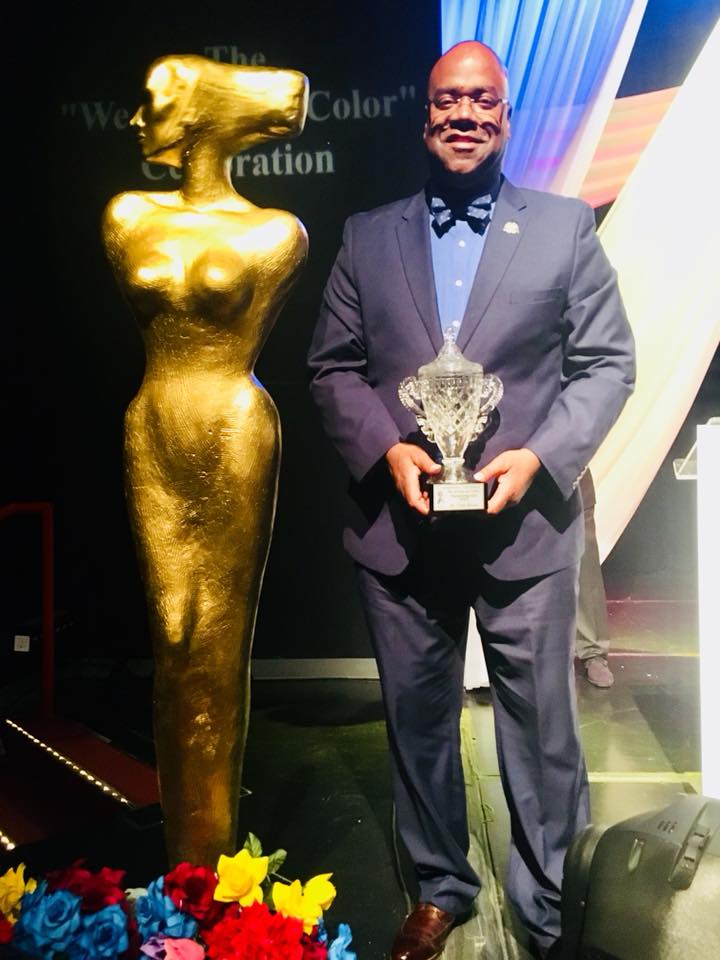 Dr. Clyde Rivers receives the Humanitarian ICON of the year award during the ‘We Dream In Color’ Humanitarian Celebration at the DuSable Museum in Chicago. The event was organized by Quinton de’Alexander, an exciting and avant-garde fashion designer and founder of the “We Live And Remember In Color” project. The event highlighted and celebrated great people utilizing their influence and resources to better mankind in various areas of philanthropy.

At the event, there was a host of entertainment which ranged from, but not limited to the opening act with Chicago’s Idol, Maurice Mahon to songs from La Waundia the First Lady of ‘WE DREAM IN COLOR’ an internationally known artist, to the amazing Crooner ‘Johnny G,’ and the extraordinary gospel artist Victoria Brady. A special memorial video tribute featuring loved ones, as PremierOne Dance Academy Principal Dancer graciously shared her gift of Dance, Baritone an Award Winning Big Band Jazz Soul Recording Artist, and Darrell, The Magnificent Saxophonist known as the “Sax Preacher” performed Prince’s Purple Rain as a special request to healing.

Dr. Clyde Rivers is the Honorary Ambassador at Large of the Republic of Burundi. Rivers has earned innumerable awards, including, in 2017, the United States Presidential Life Achievement Award for over 4,000 hours of serving the nation and humanity. Dr. Rivers is the recipient of the Danny K. Davis Peace Prize 2017, U.S. Congressman of Illinois. This annual Congressional Award is given for excelling in his field and making a difference in people’s lives. Rivers was given the Title of Don/Sir Dr. Clyde Rivers as he was Knighted into the original Kingdom of Guatemala, and the great city of La Antigua the first city established by the Spanish Monarchy. Knighted by Lord EDUARDO L. PRADO S. the Commodore De Santiago De Los Caballeros De La Antigua Guatemala. Dr. Rivers is the recipient of an Honorable Mention for the American Civic Collaboration Award 2017 – Celebrating Partnerships that Strengthen America.

He is most proud of IChange Nations (ICN), a dynamic life-changing organization which improves the quality of life throughout the world by emphasizing honor, trust, dignity, and civil discourse through the “Golden Rule.”

Rivers during his acceptance speech says “I’m humbled to win the Humanitarian ICON of The Year Award. Wow… among some of the top Humanitarians in the world. The winners of the Nelson Mandela award and Michelle Obama Humanitarian of the year award and many others. Thank you so much, Quinton de’Alexander for your excellence… in Chicago what a great night.”

Dreaming in color means many things like raising awareness for numerous causes such as Discrimination, Domestic Violence, Cancer to raising awareness of those preying on the elderly. A list of the symbolic meanings for colorful cause, campaigns and awareness ribbons can be found on https://www.weliveandremember.com/campaign-cause-awareness. These great philanthropists are changing lives globally for the good of humanity while encouraging ALL to Dream In Color!

Dr. Clyde Rivers Receives Humanitarian ICON of The Year Award for his philanthropic efforts of bringing peace, hope, and civility around the world.  Rivers says… “I want to thank every Goodwill Ambassador and World Civility Leaders for modeling “Golden Rule Living.” You are the ones that are making the difference. It’s never a one-person show so I truly thank you all. There’s much more work to do around the world. We will win if we don’t give up!

Dr. Rivers has multiple initiatives that are making a difference around the world. Every weekday you can find him inspiring others like clockwork on his ‘Live Chats‘ via Facebook whenever he is not traveling. Rivers and the ICN staff are committed to bringing back the lost art of honor by building a Culture of Honor that recognizes individuals throughout the world who have exemplified extraordinary humanitarian efforts to effectively change nations. We honor people and organizations that believe every life is valuable and is created to bring a contribution to the world. ICN is the largest “building cultures of honor” network in the world.

To Learn more about Dr. Clyde Rivers and how he can assist your government or nation contact drrivers.worldwide@gmail.com.